Anyone who reads a lot opens a book to chase a high, and mine is on the sentence-level. I don’t need it every time, but I am hoping for it: that sentence where each word is set with tweezers like gems in a ring.

I am a little embarrassed about why: because it feels good.

I am mildly synesthetic about language. I used to mod a chat room that didn’t require a login to claim a username (you could just say you were someone and jump in). We had a couple of people within the fandom try to impersonate others in there to start drama. I shut that down immediately. I got such a reputation for being able to identify who was trying to pretend to be who, and quickly, that we had to move to Discord (which has unique logins) because people started trying it just to see how quickly I’d figure it out. Because fandom is a silly place, I had people, jokingly (and then not so jokingly) suggest I was psychic.

I’m not. There is a sensory element to a writer’s voice, for me. And as a side effect, some writing feels good. Not in a sex way. It’s a lot more like getting a hug or having fingers run through my hair. Physical, but not sexual, pleasure.

I figured out which voices do it for me What I am chasing, my high of choice, is the voice of a talented English writer who knows more than one language. Now, as precursor to this you must actually be able to write, but if you do and you know another language? That’s the shit. Modern romance languages, or Korean, Japanese, or Xhosa? Nice. Know Latin? Good! Greek (modern or ancient)? Better. If you know both Latin and Greek and can write? I will follow you. Gimme the words.

I feel literal pleasure from reading Emily Wilson’s translation of The Odyssey. It is an oxytocin, my-skin-feels-good high. Ms. Wilson is not merely a good translator, but her choice to translate that first sentence as “Tell me about a complicated man” evokes the word-perfect quality of Raymond Chandler. It’s the intersection of my two favorite things. My favorite nonfiction book is Killing from the Inside Out, which is a priest writing about the history of the philosophy of just warfare and its role in PTSD (which I care about). But a fascinating topic, explored well, doesn’t make something my favorite. The sentences feel good. That probably comes from a background in studying texts in Latin and ancient Greek. China Mieville’s mother was a linguist, which shows. A friend of mine, knowing I am like this, sent me these paragraphs. I’d never read anything of his. 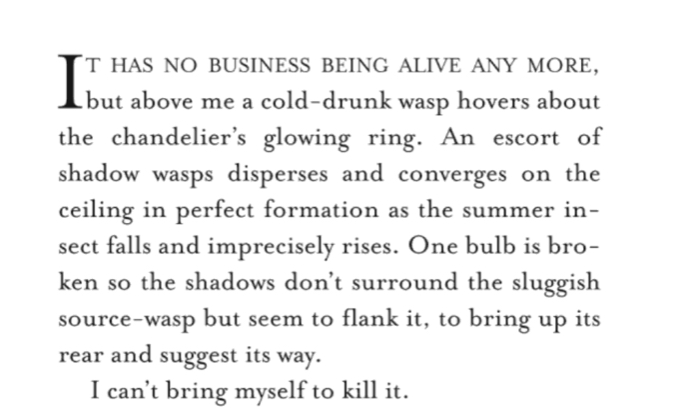 This animated something in me. I dropped my phone, put on a coat, and took a walk. I immediately hated him for writing it, and would also follow him into the fucking sea. I don’t know if it’s good, I don’t know if this reaction is something I ought to be embarrassed by (I am). I just know: this is drugs.

I can speculate why. I read a lot of classics as a kid and the Bible repeatedly, and those were all by people who knew Latin and Greek. My parents both studied both languages (and my father took it upon himself to correct my word usage a lot), so that’s what I grew up on. It’s also a hindrance. When other people use a word slightly wrong in writing, even conversational writing, I’m inwardly much too harsh. This is a more aesthetically rooted version of grammar snobbery, which, outside of professional settings, is a vice. A correct sentence (grammatically or aesthetically) is not the same as a good one. Not everything exists to please me.

This way I interact with writing—that it does things to me physically—certainly influences what I write. I write horror. I write sex. I try to be funny. I’m looking for a physical reaction to what I read, and I see my job as a writer to provide one. I don’t think everyone approaches it in that way.

This is a lot of writing to get at the thing I really want to say: a particular kind of writing gives me pleasure. That is worthwhile to observe because pleasure is worthwhile for its own sake. It has causes, it has effects that can be traced, dissected, worried over, apologized for, but: